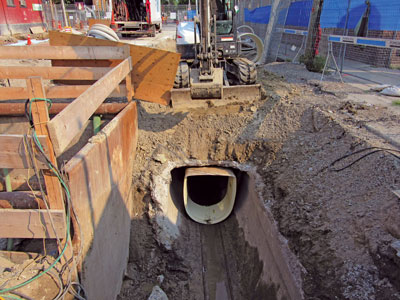 A Unique Piece of Buried Art in Toronto, Ontario, Canada

In an effort to relieve the growing transit congestion, the Toronto Transit Commission (TTC) was committed to replace its existing fleet of Canadian Light Rail Vehicles (purchased during the 1970s and 1980s) with newest version of Low-floor Articulating Streetcar by 2019.

Associated with the introduction of a new fleet of street cars, new tracks had to be build, situated along Leslie Street — a major traffic hotspot — and home to many subsurface utilities and infrastructure including two large diameter, stormwater relief interceptor tunnels. It was deemed necessary, regardless of the existing condition of these tunnels, to reinforce the structures in order to withstand the additional live loads and stress that would inevitably be caused by the new tracks and rolling stock.

During the design phase, several different technologies were assessed and a trenchless technology option quickly appeared as the preferred option, causing the least amount of disruption to traffic at this busy intersection. As the tunnels in question consisted of five different, non-circular profiles ranging from box to elliptical, a grouted-in-place panel lining (GIPPL) system was selected and specified by the authorities.

Following the initial CCTV Inspection and condition assessment for the two interceptor tunnels, a rather unusual section of the Upper Interceptor was found. This involved an elliptical profile, which transitioned into an inverted arch profile over a 7-m length. To further complicate the issue, the transition section occurred around a 90-degree bend that was positioned underneath the main track intersection between Queen Street and Leslie Street, a critical area of the project.

At this point, Channeline International was approached to offer its technical expertise into the viability of lining the “transition zone” with custom-molded GRP. With more than three decades of experience in manufacturing structural, non-circular GRP panels and following detailed engineering into the feasibility, Channeline International confirmed that the project could be done.

A WRc-Type 2 liner was proposed, giving a 28-mm wall thickness for the elliptical profile liner and a 23-m wall thickness for the Inverted Arch Profile Liner. Due to the friction coefficient of the inside of the GRP liner, flow calculations offered an increase of up to 0.3 m3/sec, which is normal with this type of liner. The increased velocity of flow will also improve the self-cleaning characteristics of the renovated sewer.

Approval and acceptance of the Channeline GRP Structural Pipeline Rehabilitation System’s final designs were given in May 2014 and the custom-made GRP pipe sections were produced and delivered to site by late July.

The installation contractor for this project was Sade Canada, based in Quebec City, Canada. Taking just four days to install the transition zone panels from two access points, the liner panels were pulled into place along pre-installed, sacrificial steel rails. Once in place, the joints were filled using structural epoxy putty and all lateral connections cut and reinstated using cured-in-place sport repair materials to bridge the gap between the newly installed panels and the connection. Annular backfill grout was performed using a small low pressure grout pump and Ready mix cementitious grout giving a 28-day compressive strength of 1,750 psi.

The general concept of the Channeline product is that a very stiff and strong panel section is constructed, but with a relatively thin wall. The product differs from that of standard GRP hand or filament wound pipework in several fundamental and important ways. Normal GRP pipework consists of windings of layers of resin-saturated glass, which is impregnated with sand, achieving its stiffness by building up ever increasing wall thickness. Channeline derives its strength and stiffness through a different method, employing the mechanics of sandwich panel design, incorporating a unique polymer and aggregate core.

There really is no theoretical limit to the shape and size of Channeline panel that can be effectively manufactured. Because Channeline technology includes the evolution of multi-piece segmental construction, where necessary for transportation, even very large, peculiar shaped rehabilitation projects can be accommodated using Channeline products. All Channeline products are custom built and can be produced in any size and shape, including eggs, boxes and elliptical shapes, maximizing the rehabilitated cross-sectional area, thereby optimizing the flow capacity.
Large diameter pipelines and culverts represent the backbone of any city’s utility network for the collection and disposal of sewerage and effective drainage of stormwater.

In many cases, the fabric of these pipelines, which may consist of brick, stone, concrete or clayware will have been constructed decades ago and although proven resilient, has eventually succumbed to the ravages of time, suffering the effects of H2S attack or erosion and may even be exhibiting signs of imminent failure due to structural loading beyond that of its remaining capability.

The Leslie Street Project is an example of the unique benefits of the Channeline product, whereby even the most challenging shapes can be produced, customized to the extraordinary circumstances encountered in this more than 30-year-old inceptor tunnel in Ontario.