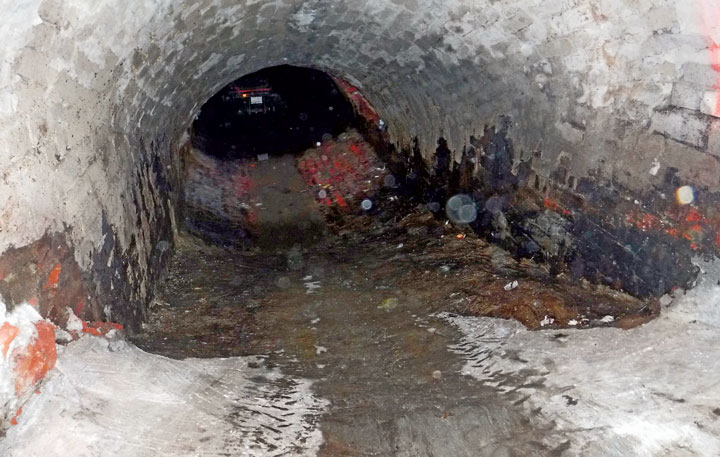 When it comes to infrastructure improvements, cemeteries pose a unique challenge to contractors who most certainly do not want to disturb the graves of those buried there. This challenge of not disturbing the eternal resting place for thousands of souls makes trenchless renewal projects a no-brainer.

PW Trenchless Construction Ltd., of Surrey, British Columbia, Canada, tackled such a project in 2016 when it was commissioned to rehabilitate a 100-year-old non-circular sewer under the Ross Bay Cemetery in Victoria, British Columbia.

The Victorian-era cemetery has, for a long time, been more of a park for the locals than a cemetery. David O’Sullivan, owner of PW Trenchless, adds that the cemetery is also a popular tourist destination for history buffs because many of people who helped shaped the growth of Vancouver and British Columbia as a whole are buried there.

“In addition to the site constraints, it is a historic cemetery with some British Columbia’s crème de la crème dignitaries buried there,” O’Sullivan says.

Originally, the Ross Bay Cemetery had a few creeks running through it, the 1,550-mm by 995-mm (61-in. by 39-in.) storm sewers were built to allow for the creeks to be filled in, allowing for more area for graves. The creeks do not run in straight lines and, as a result, the sewer is a hand-built dual layer of bricks that has many curves and elevation changes.

RELATED: Rehabbing a Pair of Egg-Shaped Sewers in Winnipeg with Sliplining

Repairs to this brick storm drain had been done over the years, but it was time for a more permanent solution. PW Trenchless was contacted to repair the sewer line in May 2016 and in June 2016, the company sent a team of technicians to assess the varying dimensions of the line and create a comprehensive survey of the pipe.

To measure and order the pipe needed, a pipe mandrel mimicking the outer dimensions of the proposed new pipe — 1,396 mm by 895 mm (55 in. by 35 in.) — was manually pulled through the complete length of the existing brick pipe. Measurements were carefully taken address the 12 horizontal curves and four vertical drops. Once complete, PW Trenchless ordered the pipe segments from Channeline International, which manufactured the pipe in Dubai.

Because of access restrictions, the pipe was divided into two sections with the renewal taking place from one central access pit. The higher section is a run of 98.9 m (324 ft) and the lower section stretches 123 m (403 ft) and is adjacent to the Ross Bay.

PW Trenchless used Channeline’s segmented glass reinforced plastic (GRP) liners, and crews worked in theFall of 2016 to complete the renewal of the sewer. Adding to the complexity of renewing the 222 m (728-ft) long sewer were 12 curves and four vertical drops. With limited access due to the location, a single entrance pit had to be dug in the middle of the run, and workers worked in both directions to complete the project.

The Channeline GRP segments waiting to be placed. The access shaft was dug at a central point and PW Trenchless workers built specialized equipment for moving the pipe sections inside the host pipe.

The entrance pit was 10 m (32 ft) deep and because there was only the one access point, the crew — trained in confined space rescue — had to devise a transport system for the pipe sections and the workers from both sides of the pit. This was also used to tug sections of the pipe into place.

Each segment was inserted into the host pipe from the access point and then moved into place at either end of the existing host pipe. The pipe sections have the gaskets installed and lubed with pipe lubricant and are winched into place by winches hooked to anchor points mounted on the previously laid pipes.

The pipes are set into place on grade and held in place with blocks of wood that allow for grout to be pumped into the void between the host pipe and the new Channeline GRP without the new pipe moving or “floating.”

Once the renewal was completed and connected to the end point manholes, the entrance pit installed for this process had a concrete lid placed over it with a manhole-type entrance suitable for future maintenance and inspection.

The project was completed successfully with the many walkers and history buffs who frequent the cemetery looking on through all the phases of the work.

With this project, as well as the many others PW Trenchless tackles each year, O’Sullivan points to the relationship that his company has with the municipalities — one where they approach the project from a “team” perspective.

“I believe that the key to a successful project is built on a good relationship between the contractor, consultant, pipe manufacturer and the owner, and the common enemy is the project,” O’Sullivan says. “It is a team approach where we abandon the typical confrontational contractual relationship that is present in many construction projects and build a collaborative relationship.”